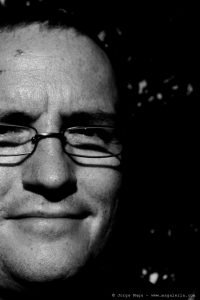 Jorge Maga was born in 1964 in Göttingen (Germany). Photography has been his great hobby since he was six years old. In 1983 he graduated from high school in Bochum. Afterwards he lived with his family in Berlin. In 1988 they moved to Alsfeld in Hesse. There they founded a ballet studio, his wife gave lessons and he designed and designed the stage sets for the performances.

In 1994 the family moved to Andalusia. Until 2006 Jorge Maga worked as a graphic designer for Stewart-Printers in Nerja. In the meantime he has published texts and photos as a freelance photographer and author in various magazines. In addition, he has been the editor of the internet magazine www.das-MAGA-zin.com and the blog www.infoaxarquia.com, about the Axarquía for many years.

Over the years, more and more pictures have been accumulated in his archive, some of them are now here, and there will be more. On the one hand, various works by the photographer are exhibited. On the other hand, he is particularly interested in his adopted country. Due to his professional activity, many of the photos were taken on tours through Andalusia.

Over time, more and more pictures are being added, new ones as well as older works that are digitized piece by piece. So it is worthwhile to stop by again and again.